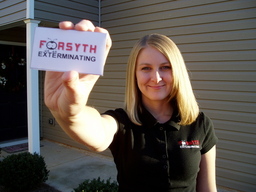 Ms. Ramirez understands the mission of PWIPM and its goal of strengthening the forces and network of women in the pest management industry. As the winner of the annual scholarship, Julie received funding to further her career and business, as well as a trip to Washington, D.C. for PestWorld 2008 where she was formally presented with this award at the PWIPM Wine & Cheese Reception on October 23.

As a child, I remember my father chasing me and my brother around the house with big rhinoceros beetles. He would catch white-faced carpenter bees or cicadas and hold them to my ear, the buzz always provoking my shrieks of terror. These love-hate childhood moments planted seeds which have blossomed into a passion for pest management. I began working in the family business when I was just 15-years old, and discovered at a young age that working with family had its own set of challenges. Although I always admired by father, I would always tell him, “Someday, I’m going to get a real job.” After college, I quickly realized that the pest management field had me hooked. I haven’t looked back since.

Standing in a room full of successful, brilliant, hard-working females who are all looking at me, applauding & cheering for me, is a surreal feeling. Not that I wouldn’t have been honored if the room had been full of men, but the fact of the matter is that men don’t know the struggles associated with being a woman with a career in pest management. It just feels good knowing that you have this kind of support. As the recipient of the PWIPM 2008 Scholarship, I have been awarded recognition for my achievements, reinforcement of my involvement in the industry, and realization of my future career goals. For this I am exceedingly thankful. In addition to attending PestWorld 2008 in Washington, D.C., I plan to take several career advancement courses throughout 2008/2009. I also plan on attending PestWorld 2009.

I am convinced that women are greatly needed in this industry, and the great ones already in the industry are often over-looked. Yes, I know…this is the 21st century in America, and there is nothing a woman can’t do, right? The reality that I know is one where women have to work twice as hard to be taken seriously and to be respected for our accomplishments than our male counterparts do. That is why I am twice as proud to be a woman entrepreneur, and I always take pride in promoting our industry to women. Recruiting women into the pest management field and cultivating their career advancement is a catalyst for diversifying the workplace.

Women naturally have different skill sets than men do. They are more detail-oriented, thorough, and empathetic to customers’ needs. And since the majority of all (pest control) purchases are made by women, it is advantageous to have women pest professionals who can relate to our customers’ concerns and demands. It has been my experience over the years that women actually prefer to have a woman performing a service inside her home, since there is automatically a level of trust there. All of this adds up to more satisfied customers, a more diversified workplace, and improvements to the bottom line.

For those women who have already chosen a career in pest management, I urge you to get involved! I’d like to take a short stroll back in time in an attempt to demonstrate how being involved helps you further your career: Back in the day (mid-1980’s), PMPs had very little camaraderie amongst themselves. They would give each other dirty looks when they passed by on the road, and there was very little collaboration. It’s like everyone was guarding some huge secret that, if discovered, would be the end to one’s business or career.

This culture fostered feelings of ill-will against competitors. About three years ago, I started getting involved in my state organization, the Georgia Pest Control Association. First, I decided to take their PCO training course before I became state-certified. I started meeting some really nice people in the industry, and discovered that other PMPs were incredibly willing to offer helpful advice. After the course, I signed up for the GPCA’s Leadership course which is designed to allow other owners and managers to network with one another. Wow! My entire perception of the industry began to shift, as I started to discover that the bar in the pest management field was being drastically raised with higher levels of professionalism and a stronger sense of pride in what we do.

In addition to a few other classes and events offered by the GPCA, I joined the PR committee where I now serve as the co-chair. This summer, I was selected as a recipient of the GPCA Guardians Scholarship, where I received an all-expenses-paid trip to attend NPMA’s Academy. Subsequently, I was notified that I had won PWIPM’s scholarship! I share this with you not to gloat in my recognition, but to demonstrate to every woman in this industry how being involved can blossom into wonderful opportunities that will help advance your career, as well and as your personal growth and development.

For every woman reading this article, my call to action would be to get involved now! Don’t put it off, go ahead and pick up the phone. Call PWIPM, or call your state organization and ask how you can get involved. This will be the first step in a journey that can open many doors for you throughout your career. If you’ve never gotten involved, it’s hard to imagine how your involvement will pay off for you, but it will!

Thanks!
I would like to thank PWIPM for the scholarship awarded. I would like to thank my husband, Mario Ramirez, for always believing in me and being my #1 mentor. I would also like to thank GPCA, especially Valera Jessee, Connie Rogers, and Richard Spencer, who have all played pivotal roles in my advancement as a young woman in the pest management industry.